Athene Noctu4 is the current project of the Spanish sound artist José María Pérez-Flor Mejías, born in Cádiz in 1964 and now residing between Córdoba and Seville.
In previous projects since the mid-90s such as Tension Co., Feday, Cine-Oído or Centro Electromecánico, etc. In addition to being the creator and director of the international festival of sound art and multimedia “Intr: Muros Arte Sonoro” (Cazalla de la Sierra, Seville), the festival of live soundtracks “La Mirada Sonora” (Seville), and the Intr Laboratory: Muros (Seville).
“Technically, my music is based on the manipulation of acoustic instruments and sound objects from the natural environment using electronic devices and on feld recordings to a greater or lesser extent processed. Just as conceptually, the music of Athene Noctu4 is based on the relationship between philosophy, metaphysics and sound, I like to transfer thoughts and refections belonging to the world of the pure mind to the sound plane, in the pre-Socratic sense of the term mind as Noûs, a term that in Ancient Greece it was inextricably associated with the soul or spirituality of the individual. “
Athene Noctu4 to date has released three albums, “In search of the Bronze Forest” in 2019, “Soñando el Tiempo” in 2020, both released on his own Intronauta Music label and “Desierto / Deseo” released by the French netlabel Kalamine Records in 2021.
As Athene Noctu4, he has carried out sound performances in various venues in Spanish cities, as well as at festivals, the last one being held at the Sonikas International Sound Art Festival (Madrid) in December 2020. 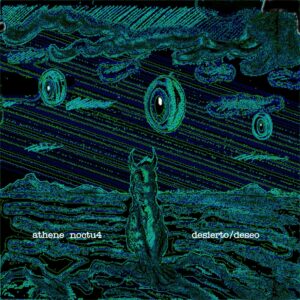 “Desierto/Deseo” is a sound reflection on human desire and its endless and painful evolution through history.
It is a vain attempt to construct with sounds an epic of cause-effect relationships between our ontological dissatisfaction, our desires and the emptiness that their achievement causes us.
For many of us desire is a problem, the desire for property, for position, for power, for comfort, for immortality, for continuity, to be loved. The need to have something permanent, satisfying and lasting: something that transcends time. Always substituting an object of desire for another that seems more satisfying, nobler, more refined, pursuing and exchanging mechanical symbols that constitute pure mirages in the desert of our frustrations.
This leads us to wonder if there are good wishes and bad wishes, wishes that “advance humanity” and wishes that take us deep into the eternal wheel of the dual dream.
A philosophical question, which like all of this kind, can only lead us to another even bigger question, thus perpetuating the Russian doll game of our mind.